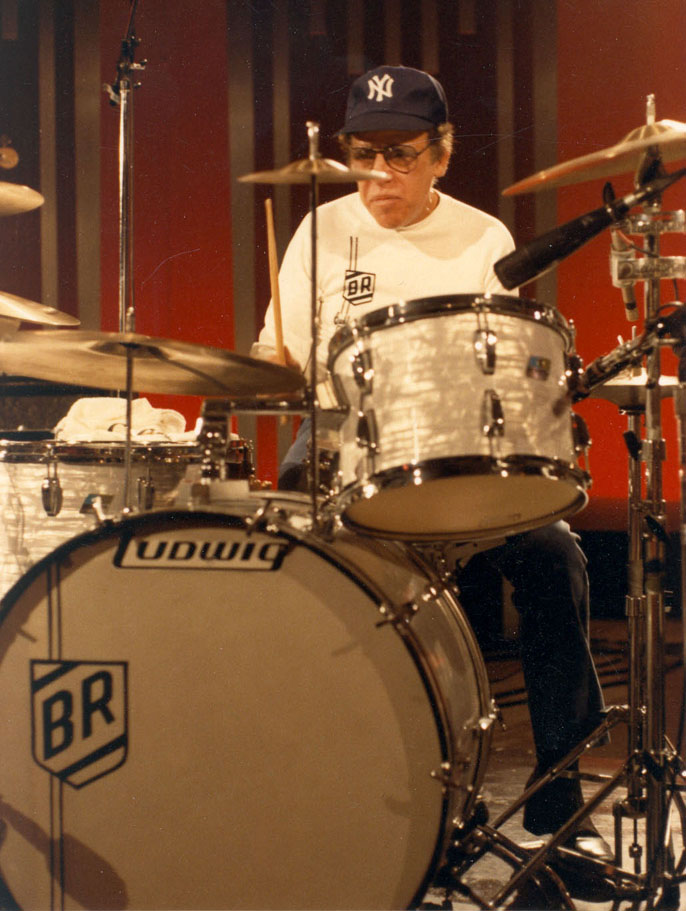 At the risk of further popularizing a certain piece of underground trash, I would like to address the notorious Buddy Rich “scream tape” that has become somewhat “gospel” in the history of the “World’s Greatest Drummer.”

First of all let me say that having worked with just about every version of Buddy’s band (as a trumpet player, arranger, confidant, or producer) including the one on the tape, these kids got off easy, to say the least.

Yes indeed that’s Buddy spewing putdowns and obscenities at a few of his band members and yes, on its own, the tape paints the fearless leader as a foul-mouth bully. And yes, in today’s politically correct world, Buddy certainly wouldn’t win any “manager of the month” awards, but keep in mind that we’re talking about the music business, specifically the big band jazz world and Deming’s management techniques don’t wash in this world. Every band Buddy ever had was subject to his brand of leadership and, just like the real world, one either learned from these experiences and got stronger or washed out.

I joined Buddy Rich’s band as a trumpet player in January of 1968 and still look back at that period as one of the highlights of my career. For a trumpet player freshly groomed at Berklee School of Music, Buddy’s band represented the pinnacle of success and it was the beginning of a musical education that I could never have acquired within the confines of academia. Some lessons sink in right away and others take some time. Here’s a sample of one of my more memorable lessons.

After a month at the Sands in Las Vegas and a whirlwind schedule of record dates in L.A., gigs with Sergio Mendes, and others, we embarked on a European tour with Tony Bennett. That in itself could be a mini-series but I’ll concentrate on Buddy.

Because Buddy’s previous tour with just the band (1967) wasn’t well received (according to the booking agents), it was decided by the agents that Buddy’s new band could be best introduced to the British audiences by coupling him with a known quantity, Tony. The band opened the shows for the first set and Bennett would do the closer. It was a phenomenal combination and Buddy’s reputation (as a bandleader) blossomed. Every night being sold out added to the excitement of the crowd and the band.

The band had the highest respect for Tony (rare for a singer) and the quality of the performance. When he sang Robert Farnon’s Country Girl with just the accompaniment of John Bunch’s piano, the house was absolutely silent and we literally held our breath during this segment of the show.

In the middle of our tour we hit Birmingham (then quite the working class town) and Buddy pulled out all the stops to win over this tough audience. I can’t remember all the charts he called but I know he ended with the West Side Story medley and it was a smash with the crowd.

As an encore he called Love For Sale and if you aren’t familiar with the chart, suffice it to say that there is a drum break before a modulation that has become somewhat of a signature for Buddy. His lightning speed roll in this break has been copied (or should I say attempted) by just about every big band drummer I know.

That night he blew the break. Totally blew it and stopped the band. We were in shock. Having never experienced this before, we just looked around at each other. The audience was dead silent. Buddy yelled to Pat (my brother acted as musical director at times because Buddy couldn’t read music) “pick it up before the break.”

Pat yelled out the appropriate rehearsal number and we were off again. As you can well imagine, this time he nailed it and the audience went nuts. I wouldn’t have wanted to be Tony trying to follow that. But this isn’t the end of the story.

Years later Buddy and I were hanging out in his Lincoln Plaza apartment one night after a gig trying to find something edible in his refrigerator. Not as Spartan as Mel’s (Torme) but still few choices so we did the usual, ordered take out from Patsy’s (Buddy & Sinatra’s favorite eatery since the late 40’s).

While we waited for the delivery I reminded him of that night in Birmingham and casually asked, “Buddy, did you blow that fill on purpose for the show business value or did you really blow it?” What came next was probably the most intense “lecture” I’ve ever received from him.

After he cooled off he told me never in his professional career did he ever give less than 100% and the idea of shortchanging the music for a cheap shot would be akin to artistic murder. We talked about his early days and the necessity for professionalism in all aspects of playing (and writing). I wish I had a tape recording of that talk.

The more I thought about this, the easier it was for me to understand many of his “moods” and “tantrums” when players didn’t give their all. I’m sure that was the case with those on the receiving end on that tape.

So if someone brings up the infamous Buddy Rich “scream tape” to you, be aware that those particular band members got off easy. I learned a lot form Buddy, I just hope they learned something.