When Palermo Came Marching In 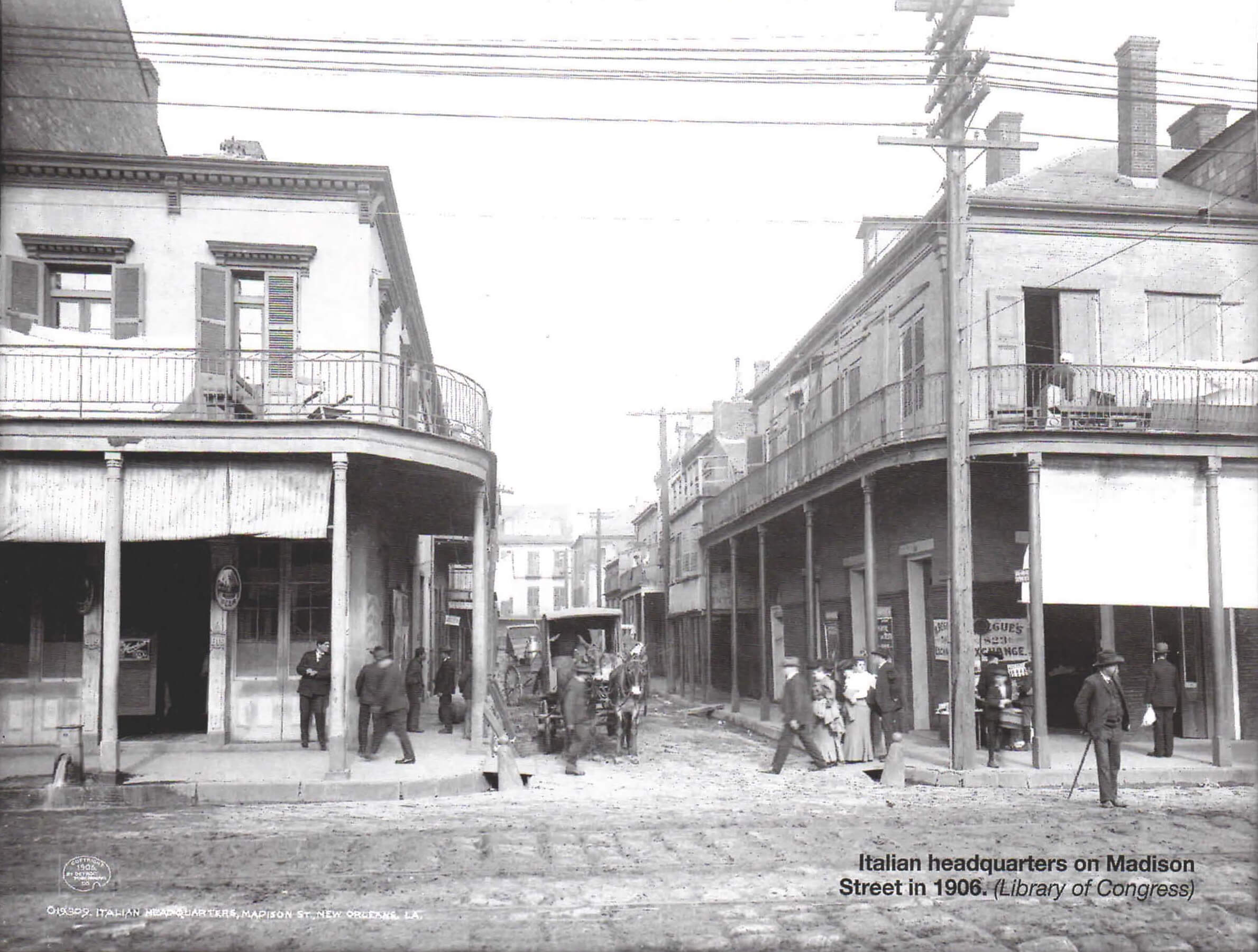 The Italian French Quarter in New Orleans
by Helen Colella

Building around a location known as the Old Square and dubbing it the French Quarter, the French founded the city of New Orleans in 1718. The city’s oldest neighborhood, the French Quarter became a melting pot of many cultures, from French and Spanish to African and NativeAmerican. A century and a half later, Italians arrived en masse.

The very first Italians, however, arrived much earlier. Italian names were recorded in Louisiana as part of the Hernando de Soto Expedition in the mid-1500s. The best-known of these was Italian-born Henri de Tonti, a soldier, explorer, fur trader,and government representative to the Choctaw and Chickasaw tribes in the Louisiana region. During his years in office, he facilitated many negotiations to maintain peace. In honor of such leadership skills, city authorities later named a downtown New Orleans street for him—Tonti Street—that still exists today.

After New Orleans came into existence and through the end of the Civil War, Italians began to establish themselves in the French Quarter community as innkeepers, merchants, and importers. One of the most wellknown and successful businesses at the time was the New Exchange Coffee House on Chartres Street—owned and operated by Milan-born Pierre (originally Pietro) Maspero. The 1850 census stated that “Louisiana, with 924 Italian-born immigrants, had the highest concentration of Italians on the North American continent.” By the end of the Civil War, Italians in Louisiana had become entrepreneurs, grocers, poultry dealers, and physicians.

After the Civil War, die work Italians sought changed dramatically. Because of the need to replace slaves on the farms and plantations, the Louisiana Bureau of Immigration started recruiting manual labor from Italy. Lured by the same promise of opportunity offered to earlier immigrants, Italians from southern Italy, particularly Sicily, began immigrating aboard cargo ships, such as the SS Darlington and SS Letimbro, bound for the port of New Orleans, one of the two entry points into the United States (the other being Ellis Island).

The Sicilian seafaring travelers were comprised of diplomats, business leaders, musicians, and artisans, as well as farmers and fishermen. Many of themcame to New Orleans because of its strategic location on the Mississippi River not only for the opportunities it offered as one of the largest and richest trade-cities, but also because of their desire to be near the sea.

One of the first problems the Sicilians encountered arose from the census forms that classified them as Black because of their dark skin. They were forced to follow the Jim Crow laws of segregation and were not permitted to socialize with or marry whites. In many cases, they were considered inferior to the Blacks, the most discriminated group. The mutual struggle they faced led Italians and Blacks to form a close relationship.

On October 15, 1890, New Orleans Police Chief David Hennessy walked out of a saloon with a friend after enjoying a late night meal of oysters. They parted ways and as Hennessy headed home, gunfire rang out. His friend rushed to his aid, finding Hennessy lying in the street dying from gunshot wounds and allegedly whispering, “The dagos did it.” This prompted New Orleans Mayor Joseph A. Shakespeare to order the police department to “arrest every Italian you come across if necessary …”The police responded by rounding up 120 Italians, nine of whom were brought to trial. The jury found six of them not guilty and failed to reach a verdict on the other three. Yet the judge refused to let the men go, ordering them back to prison.

Upon learning of this, the Italian government severed diplomatic relations with the United States. A Grand Jury stepped in, yet it exonerated those involved in the lynchings. To compensate for the tragedy, the U.S. government paid $25,000 to Italy to restore international relations.

They began working side by side on sugar and strawberry farms, on the city’s busy docks and at other menial jobs. Many times, Sicilians received less money than the Blacks for the same work. Both groups also faced ignorance that sometimes even led to being accused of and held accountable for crimes they didn’t commit. It was here, in New Orleans, where Italians became victims of the largest lynching in United States history occurred.

At the turn of the century, the ‘new’ Italian immigrants had little opportunity in the declining French Quarter. They were forced to live in adverse conditions, primarily in the downtown—or “Mediterranean” half of the city—which led them to create their own neighborhoods. Italian immigrants began to establish Italian businesses: gelato stands, grocery stalls, butchershops, barbershops, storefront cobblers, and restaurants. These businesses flourished so much that the French Quarter acquired an Italian nickname, becoming referred to as “Little Palermo” since Sicilians represented 90 percent of the Italian population.

Sicilian foods became so popular that the restaurant folks in New Orleans modified the Italian tomato sauce to fit their cooking style. They added a brown roux, a flour and fat mixture to the sauce to thicken it, and called it “red gravy.” Many restaurants changed their menu to include ItalianCreole cuisine, which included many seafood and pasta dishes, one being Shrimp Scampi.

With food, also came music. Sicilians brought their love of music to New Orleans, and because they lived side by side with Blacks, they started playing a role in the development of Jazz—a contribution that often goes unrecognized. It was Nick LaRocca and his Original Dixieland Jass Band who, in 1917, recorded “Livery Stable Blues,” the first ever jazz recording. It also became the first record to sell more than one million copies. After LaRocca, jazz spread across the country and many Italian-American jazz musicians, including New Orleans’ native Louis Prima, contributed to the burgeoning scene, often crossing color lines.Italians still maintained a connection to their homeland, establishing several social and benevolent organizations to preserve their customs and provide support for new arrivals from Italy. The Societa Italiana di Mutua Beneficenza was established in 1843, and the San Bartolomeo Society, which stands as the oldest ItalianAmerican society in New Orleans, was formed in 1879.After World War I, Italian immigration to New Orleans began to diminish. However, because the prior arrival of Italians—and in particular, Sicilians—cultivated a place so rich with Italian influence, the French Quarter still holds traces of what was, for a time, “Little Palermo.” 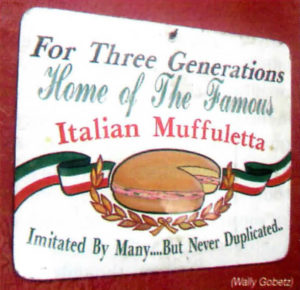 Opened in 1906 by Sicilian immigrant Salvatore Lupo, Central Grocery is famous for his trademark Muffuletta sandwich, made from the ingredients of Italian antipasto, salami, and provolone topped with a distinctive olive salad, stacked on good bread. Lupo’s store not only honored his Italian heritage but fed workers on the go and became a culinary icon. It’s still a favorite in the French Quarter today! 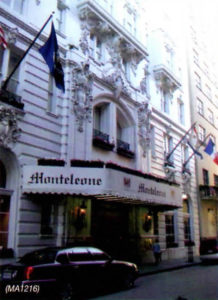 Opened in 1886 by Sicilian cobbler Antonio Monteleone, Hotel Monteleone was originally named the Commercial Hotel until it changed its name in 1916. One of the few familyowned hotels to survive the Great Depression, it also serves as a literary landmark, hosting the likes of Ernest Hemingway, William Faulkner, Tennessee Williams, Stephen Ambrose, and John Grisham. Truman Capote even claimed to have been born at the hotel (he wasn’t).

Started in 1899 by Sicilian immigrant brothers Joseph, Luca and Felix Vaccaro along with Salvador D’Antoni, the Standard Fruit Company began importing bananas to New Orleans from Honduras. By 1915, it owned almost all of the ice factories in the city to refrigerate their shipments of bananas. It was acquired in the 1960s by Castle & Cooke Corporation, which had also acquired James Dole’s Hawaiian Pineapple Company around the same time. In 1991, Castle & Cooke was renamed the Dole Food Company, giving Standard Fruit Company’s bananas its Dole sticker. 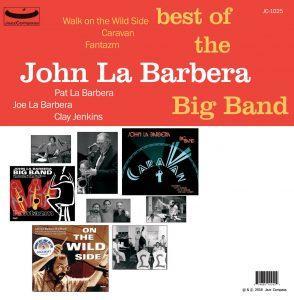